The boots the day they were received.

​Tread pattern is an acceptable reproduction of the original pattern.  Nails are driven in snug and do not protrude from the sole.  Heal is properly angled. 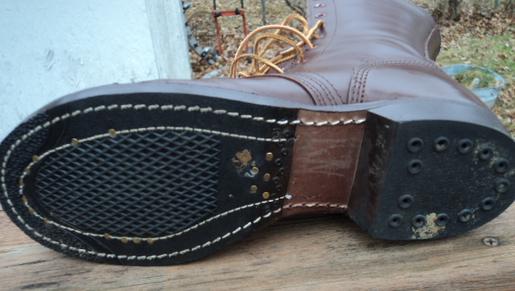 -Boot seems to be sized correctly

-One of the cheaper reproductions on the market

-Insole of the boot is of foam construction, and is not removable

-Painted/dyed brown edge of the boot

-Correct style laces are not supplied with the boot

-Stitching appears to be nylon instead of cotton

Despite some nit-picking, I am EXTREMELY happy with these boots. Most of the cons except one cannot be seen when the boot is worn.  Updates will be issued as these boots are worn and broken in, however I would recommend these boots over other companies that reproduce footwear.  This company has been around for an extremely long time and manufactured the originals in the 1940s, so it is no surprise that these would be top-notch.

UPDATE:  October 2015:  After almost a year of use, the boots are still holding up.  Nails are still set, tread does not appear to be wearing excessively, and boots still take a shine.  Boots are also pretty water-resistant from all the polish.  Only concern, is that the stitching near the bottom eyelets, that connects the upper to the lower, has taken on somewhat of a fuzzy or frayed appearance.  It also appears, that a stitch or two has broken in that area.  However, that's to be expected of "combat" boots.  Of course, the boots have the normal scrapes and scuffs, but polish takes care of most of the problems.

Inside of boot.  Things to take note of:

-Insole is some sort of plastic foam.  It is not removable, but comfortable.

-Tag on the tongue is not historically accurate 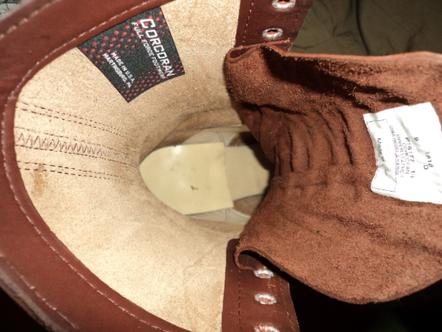 -The edge of the sole is dyed/painted brown.  The sole itself is black rubber, so one wonders why they painted the edge brown... this is not historically accurate 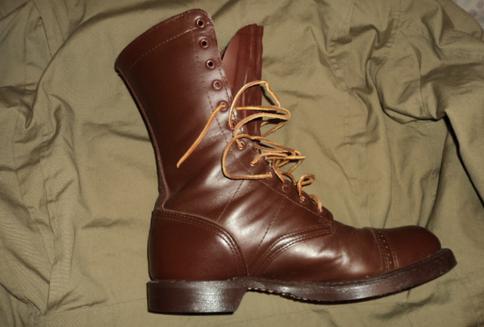 Note: this picture was taken several days after being received, after the boots had gone through a hot water bath and wearing them dry in order to aid in the break-in process.  Outdoor lighting also affects the color of the boot.  They were actually a lighter colored brown when received, very close to what was advertised on the website. 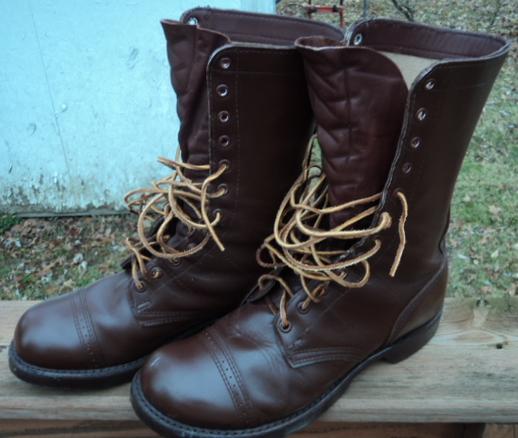 ​As any trooper can tell you, a soldier's primary mode of transportation is his feet.  So, his shoes must be of up-most quality. when the Paratroopers were first being developed, it was quickly realized that special footwear to absorb the shock of impact and properly support the Parachutist's foot was needed.  Several attempts were made to utilize strap-on braces, until it was finally decided upon to adopt a one-piece, high-top, lace-up boot.  This footwear quickly became a distinguishing feature of the United States Paratrooper during World War Two.

I ordered these boots because I have tried several different pairs from other companies that specialize in reproducing World War Two equipment, and was never quite happy with the others.  The leather did not seem to be very thick, or able to take a shine.  In addition, the rubber soles of other boots started to separate from the leather soles

​The order for Corcoran's Men's 10" Historic Leather Military Brown Jump Boot in size 9-D was placed from LA Police Gear just before Christmas of 2014.  The order was received in 2-3 weeks, with free shipping.

When the boots arrived, they arrived in Corcoran packaging (which was not surprising, as this was a drop shipment right from the Corcoran factory).  They have a modern Corcoran tag in the left boot.  They came with light light brown leather laces, as well as yellow cotton laces.  Initial thoughts were that the boots were of high quality, thick leather, and were well constructed.